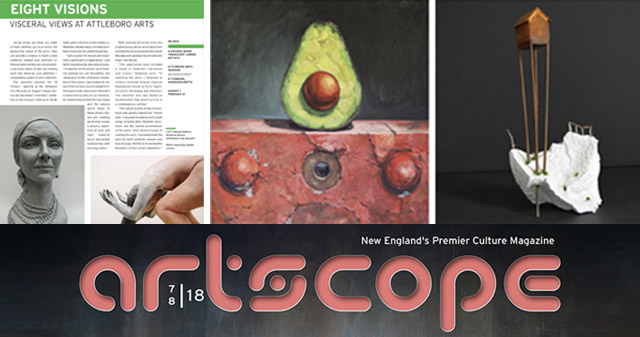 Juried shows are what you make of them, whether you’re an artist, the sponsoring venue or the juror. They can provide a chance to reach a new audience, expand your portfolio, or find out which artists you’ve not previously been aware of who are making work that deserves your attention — and possibly a place in your collection.

The selection process for “8 Visions,” opening at the Attleboro Arts Museum on August 1, began during last December’s members’ exhibition at the museum, when juror Sarah Swift, gallery director at Hera Gallery in Wakefield, Rhode Island, reviewed portfolios from over 60 submitting artists.

“I am a sucker for texture and materiality, particularly in application,” said Swift, explaining her selection process. “I looked for artists whose use of material seemed not just thoughtful, but ‘necessary’ to the contextual completion of their piece. I also looked for artwork that carried a visceral weight to it. I have personally been most interested in work that touches on our humanistic relationships to both the man-made and the natural world. Many of these artists chosen are creating works that convey a sensory experience of color and light, material touch, and spatial relationships with everyday items.”

“This application pool included a range of mediums, narratives and styles,” Mojtabai said. “In selecting the work, I returned to criteria centered around classical foundations based on form, figure, structure, technique and intention. The selection also was based on fundamentals that would survive in a contemporary setting.”

“The overall quality of the 20 portfolios was greatly impressive,” Norod said. “I enjoyed reviewing such a wide range of materiality, thematic structures and the overall presentation of the works. After several rounds of viewing the work, I narrowed down the work for both aesthetic reasons and how strongly I felt the work elicited the thematics of their artist statements.”

Norod said that Flis’ sculptural work instantly caught her attention. “Her inquisitive merging of objects spoke to me in such an inviting and whimsical tone,” she said. Flis’ drawings and sculptures are extensions of her most current body of work that has been exploring moments of discovery. “This newest work is in direct response to becoming a home owner this past year,” she pointed out. “My work in the past has been playing with the concepts of home and what that means to individuals, as well as the human psyche. The newer work has a serious environmental/political edge that I have been pairing with titles that have ‘realtor speak,’ aka real estate euphemisms, to add a sense of humor to the work.”

For this show, Flis has paired the human figure with miniature landscapes and buildings. “Sometimes the human form is more dominant, and in other pieces you will see parts of the human body like skin textures, like the alligator texture of an elbow embedded into rocks and sculptural landscapes.”

Elia’s work will consist of five large-scale ceramic sculptures and three medium-sized sculptures of the human figure in unique, somewhat gravity-defying poses. “I often use dance photography, yoga and underwater photography as visual references for the pose of each sculpture,” she said. “I refer to them as my ‘sculptural snapshots,’ and they conceptually aim to describe internal experiences of hope/buoyancy and guilt/weight within a person — captured in a moment.”

Hausrath’s one-of-a-kind monotype prints are from her “Sticks and Stones” series that has been her focus for the past year. “My work is often inspired by the natural world and, with this series, I was interested in playing the compact weightiness of the stones against the brittle fragility of the sticks, both as shapes and lines and as a reference to the permanent and ever-changing aspects of nature,” she explained. “When I was working on the prints I was reminded of the Japanese aesthetic of ‘wabi-sabi,’ where natural elements are rendered in their purest, yet imperfect state.”

Fisher noted that the commonality to all his still-life drawings is an obsession with intense perceptual rigor, compositional manipulation, the viscosity of light and the tactile, sensual nature of drawing materials. “[My] objects are generally chosen and assembled with their allusive characteristics in mind, responding to the inherent multiplicity of associations that may be evoked by those objects. [The] combinations of objects are intended to elicit interactive associations as the allusions of one object overlap those of another,” he said.

If the images of her work on her Instagram page this past spring are any indication, Baldizar’s sculptures will be stunning to see in a museum setting. The show’s announcement notes that her ceramic figures “grow out of a desire to visually translate the psychological concept of the shadow, or parts of one’s identity concealed from others, either consciously or unconsciously. She is interested in the effects of human attempts to suppress, deny or neglect the true self.” Indeed, looking at them, you can feel her hand shaping the expressions of her subject’s faces with close attention to the markings that detail each life experience.

McClear, a representational painter with a passion for the interplay between form and texture and how things fit together, works primarily in oil, with the goal of presenting a balance and solidity that invites interpretation.

Swift said she was pleased with the 8 visionaries, many of whom were favorites of hers during the initial selection process. “I love that there is an underlying theme of texture and material, all presented in different media,” she stated.

“Fehmida Chipty’s photographs provide so much information with so little effort. Using just a color gradient of light, she creates a changing spatial plane across the photo that moves from completely flat, to three-dimensional. These photos contrast the work of other artists like Lorraine Sullivan, who works in assemblage and three-dimensional, found vintage objects. Included in the show will also be two figure sculptors, and some amazing drawing and painting. It’s a great mix of many mediums and skill sets.”